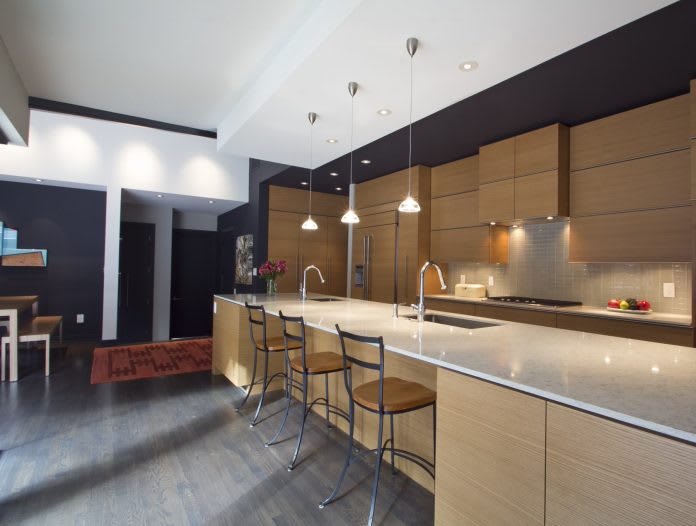 It should be understood that when it comes to kitchen cabinets there is a difference between modern and contemporary styles. Often, one is confused with the other and the inherent terms associated with each are used interchangeably. Specifically, however, a contemporary design reflects what’s happening up to the minute, it’s of the cutting edge. The modern style, however, reflects a very particular design framework that was developed over the early to mid-20th century. Before the impact of the Industrial Revolution, it had already successfully distanced itself from the common traditional styles. 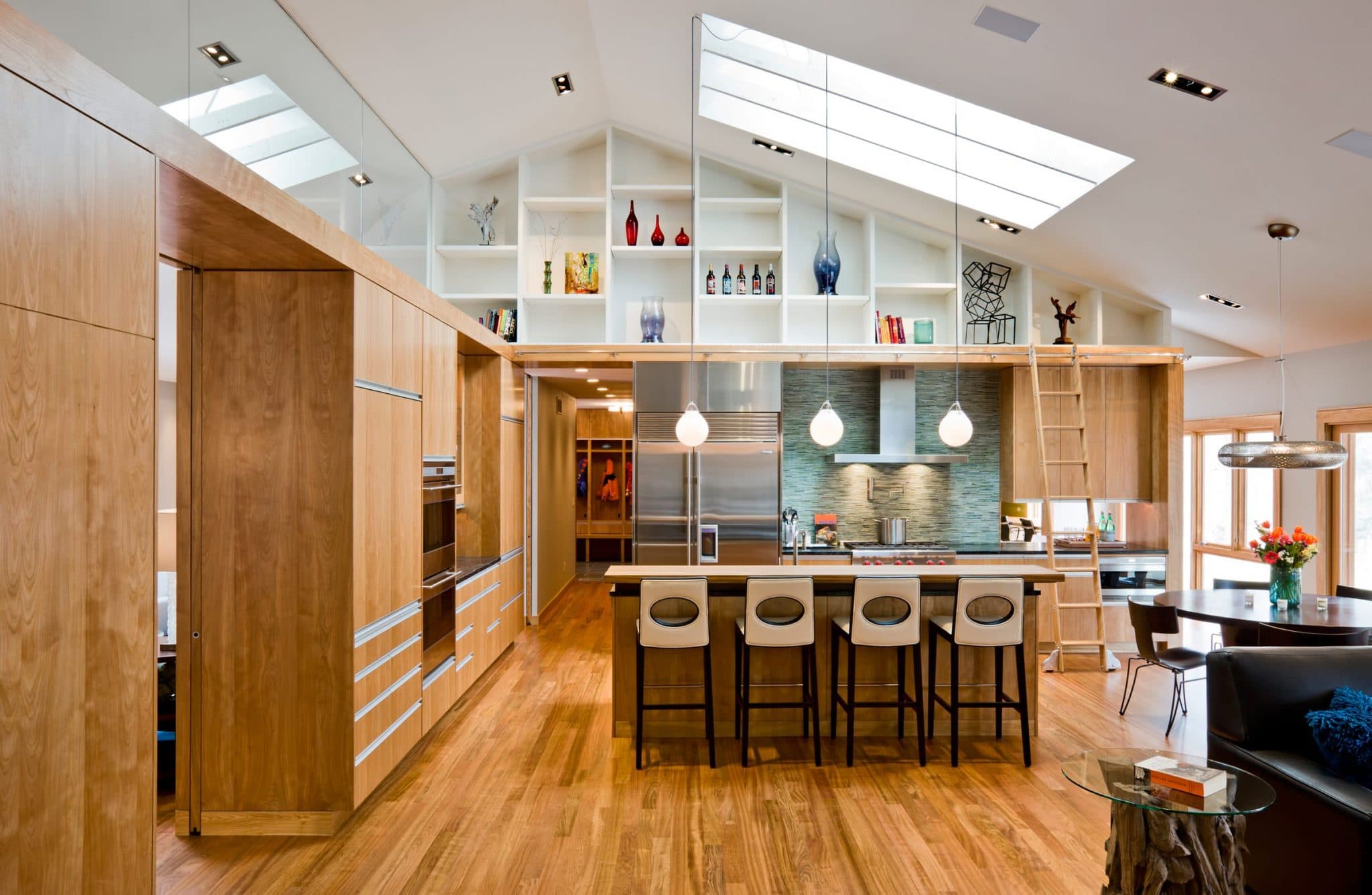 It’s no wonder these terms get to be confusing when “modern” can mean it’s the opposite of something that is traditional for a certain time and not necessarily a reflection of the present day. So, just as something that was considered traditional a hundred years age is certainly dated today, so too will be its so-called “modern” counterpart.

In the cabinet world, modern typically refers to characteristics; basic yet sleek hardware, no carved frills, dominant horizontal lines and most effectively, a frameless cabinet. It’s the natural allure of the materials used that commands attention. And that’s exactly the intent of the design.

Here is a more detailed breakdown of the characteristics that identify the modern kitchen:

Also known as a “Flat-panel” door style it is the centerpiece of any modern kitchen. If by chance you happen to see an otherwise Modern kitchen hosting a Shaker door style, you have what is considered a “transitional” style, and certainly not a completely modern one. 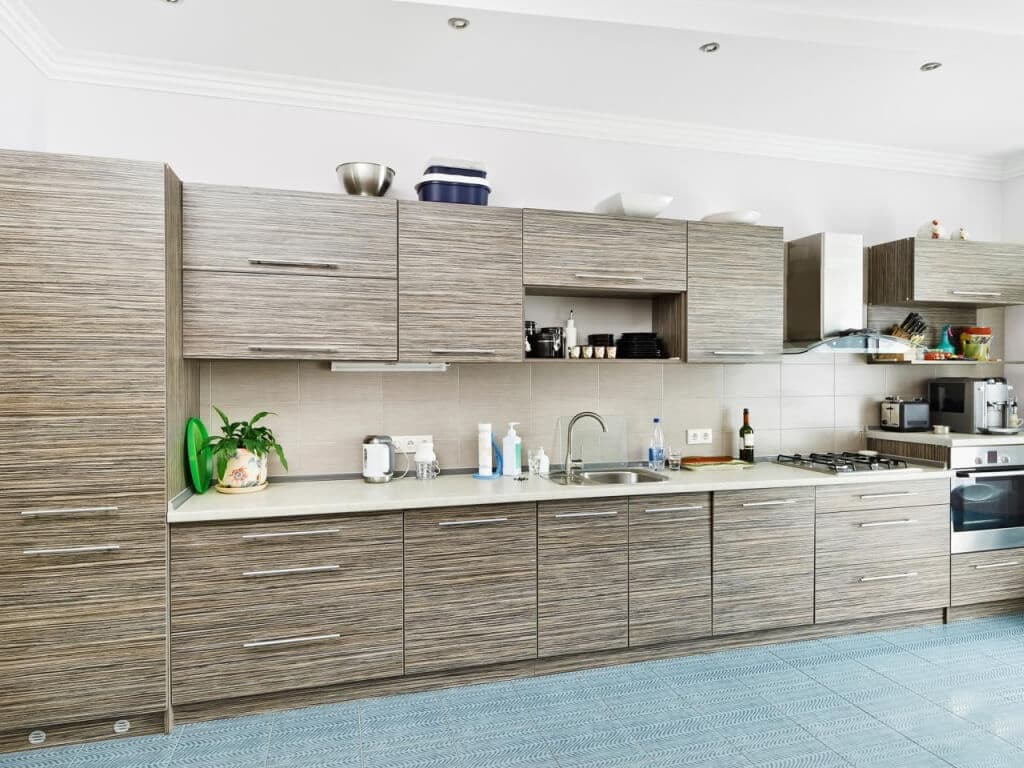 Products of full overlay cabinet construction, there’s confusion in terminology here, too. That’s because there are several phrases that all mean the same thing: Euro-Style, frameless, full-overlay, etc… all signify a door overlaying the cabinet box AKA “frameless”. This is the design found in modern kitchens rather than its flush-inset cabinet counterpart that is essentially inherent to the traditional kitchen, cabinet and furniture motifs.

True frameless Euro style cabinets are sleek. There is no visible face frame at all. Spacing between the doors and drawers are of uniform size. In the variation called a “framed overlay” the face frame is partially visible and the space between doors and cabinets differs. Unlike the frameless cabinet, when it’s closed you may only be able to see about an eight inch of the face frame in between the cabinet doors.

Another mainstay characteristic of the modern kitchen (or any room for that matter) is the sleek and simple hardware it employs. There are tubular or flat linear pulls (among many others available), that integrate seamlessly into the cabinet. The hardware will often run the full length of the cabinets’ drawers and doors accentuating horizontal lines to great effect.

This is one of the primary differences between modern and contemporary styles. You are likely to see a variety of patterns, shapes, materials and patina in a contemporary kitchen cabinet and overall design. There’s none of that in a modern style. It’s sort of like the strong silent type of cabinets. It doesn’t need to dress cool, it just is.

There are rare cases of ornamentation on modern cabinets, but they usually serve to exploit the materials natural characteristics. Such could be the case when dealing with gorgeous finishes that accentuate beautiful grains of wood, or of the spectacular and unique veining of marble.

In the modern kitchen, accents like lighting, tables, even the chairs will stay consistent with each other. In other kitchen styles you expect them to vary, but the modern is all about uniform simplicity, no frills, and clean lines. Any one of these kitchen upgrades are good, modern, elements to keep in mind.

Plain elements of certain industrial details can be claimed as modern. It could be something as powerful as a concrete wall, or cabinets so free of ornamentation they feature no hardware at all, completely smooth. It’s the one design that can be incorporated that will least likely compromise the integrity of the great modern kitchen, a classic design that has survived years of changing tastes and stands to continue for years to come.

Is it worth getting custom cabinets?