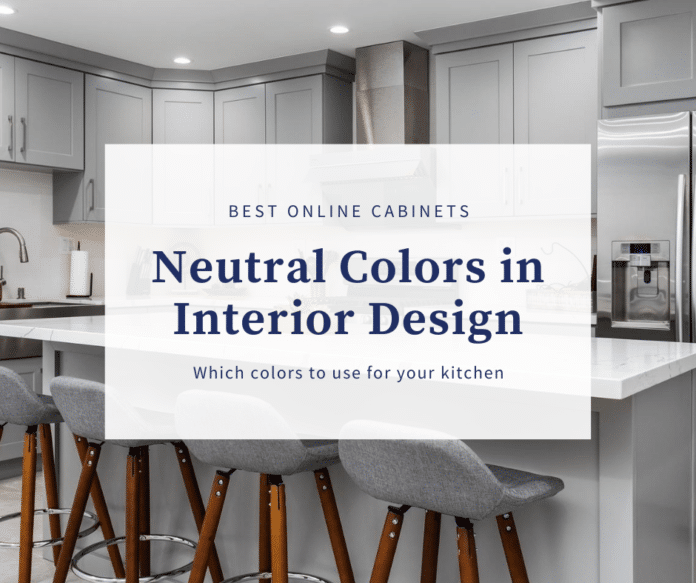 If you pay attention to the trends in fashion or interior design, you will hear phrases like “Mint green is the new neutral” or even “Orange is the new black.” But what does this mean in the context of using neutral color schemes in your new room? How can this apply in the best application to your home interiors?

What is a neutral color?

Neutral colors are those colors that are hard to define because there are many variants of it. For example, if you paint a room “white,” you must know which version of “white,” otherwise the colors won’t match.

Another stated definition for neutrals is “appears without color” but this feels too vague. Using white-alternatives, the difference between ivory, beige and gray is the color mixed in with the white called an undertone. An undertone is a color that affects the overall hue. If you add a little yellow to mostly white paint, that paint is mostly white but is faintly yellow.

However, one site classifies neutral colors as “hues not in the color wheel.” The color wheel consists of primary colors red, yellow, and blue, and secondary colors orange, green, and purple.

The final definition of neutral colors is “colors that are not bold.” In under words, the more muted and subdued versions of existing colors will usually appear as neutrals.

If you put these definitions together, you get a better understanding of the neutral palette than just any one descriptor.

Why neutral colors in interior design are important

People think of them as generic, but neutral colors in interior design are necessary canvases to highlight certain features in the room. Since the colors are not bold, attract the eye, and demand attention, they become the best background for different textures. Materials like marble are usually popular in white or black to enhance the veining that is significant in that stone. Wood is usually a neutral brown, so its natural grain is a spotlighted feature that is enhanced by the hue. Since much of nature has some level of brown in it, many earth tones fall into the neutral color palette.

Neutrals are considered timeless since they are not bold enough to go out of fashion. This classic style choice is most likely still going to look good in ten or twenty years in your home.

Since the neutral palette is subdued, it is more calming rather than stimulating compared to a bright red or blue. So neutrals are a good choice in places where you want to relax like the bedroom or the living room.

Looking at the different neutrals and how to use them.

The colors black and white are two of the most popular neutral choices; black absorbing and white reflecting all colors. While they are recognized colors in popular culture, physics scientists do not consider them colors because have no specific wavelength. This factoid seems like it would have no bearing on interior design. Yet it’s the hues that are least represented on the color spectrum that are considered the most neutral.

While black and white are both neutrals on the polar ends, they don’t have the same effect as neutral colors in interior design.

When white is the base neutral in the room, the room tends to be brighter and more spacious. White works best in making smaller rooms seem bigger. Since white is reflective, even when it is matte, it amplifies any light in the room.

When black is the base neutral in the room, it reads as sophisticated and dramatic and may even feel intimate. Any light in the room becomes the necessary focus in the room and creates dramatic shadows and contrast.

Off-white is a popular type of neutral that includes all variations of white with an undertone of another hue. The most popular off-whites are ivory which has yellow undertones and beige which has brown undertones. This is an option for those who want a color similar in brightness to white but don’t want the colorlessness.

Some people feel that pure white is too cold and sterile like being in a hospital. Others feel like a pure white room is so clean that they are afraid to add any color to it. Using off-white may work as a better canvas since the undertone can begin to inspire a color palette.

Most people are not aware that there is an off-black that works similarly to off-white but with black related hues. The difference is important if this black is under the light because you will see an undertone reflected in the light. The most popular variations of black include charcoal, espresso, and midnight blue, which although called “blue” is strongly dark.

Gray is several variations of white and black. Contrary to popular culture, there are more than 50 shades; there are 256 recognized shades, which include black and white. While people have strong opinions on black or white, they tend to have even stronger opinions on grey. Black and white can go with any other color but people debate if grey has that same ability. The key is if the gray has the same “lightness” as the other colors. The closer the lightness matches, the more compatible that version of grey is.

Lighter grays in a room tend to be more calming, even if we associate them with gray skies. Darker grays feel more intimate and mature without the dramatic boldness of straight black.

Since silver is a metal and is a version of grey, people can treat it as a neutral. This is why silver is a popular choice with hardware such as handles and knobs since it goes with everything.

Of all the colors, one can claim that brown is the most prevalent of all the colors. Brown is created by mixing all three primary colors, red, yellow, and blue, together. If you add black and white to add more depth, then brown is the most varied of all the neutral colors. The most popular browns seem to be inspired by food: coffee, chocolate, cocoa, and chestnut. Other notable browns include beige, khaki, sand, and tan.

Since all colors are represented in each brown shade, it can carry the accents of other colors next to it. So if a brown is next to orange, the brown looks more orange, especially browns with red and yellow undertones. If an orange-brown is next to the contrasting color blue on the color wheel, the difference will be more highlighted.

One of the most important browns in interior design is wood, which is in a lot of furniture. This is a required neutral if you aim for a natural interior.

Sunny C. - June 22, 2020 0
Grey shaker cabinets are just as timeless and versatile as white. Depending on how you style them, you can have a traditional, rustic kitchen or a sleek and modern space.