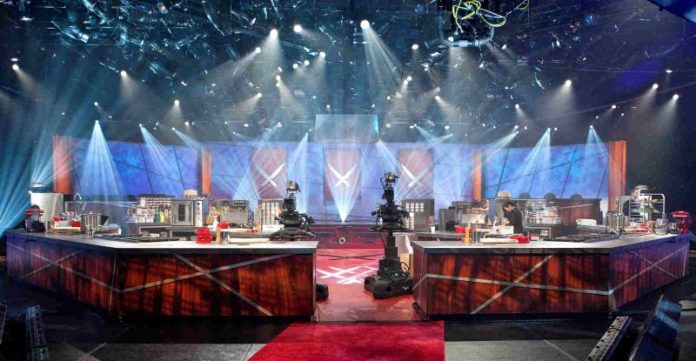 Iron Chef is a phenomenon that started in Japan in 1993 and they introduced the kitchen stadium. The kitchen original became a worldwide sensation. Taking the formula from Japan, Iron Chef America arrived in 2005 and became an instant hit in the United States. Several other comparable cooking competitions sprouted during the Reality TV heyday phase in the 2000s.

Several people would love having their own kitchen stadium in their own homes. But when you break it down, what goes into creating an “Iron Chef” kitchen? For reference, we are using the Iron Chef kitchen stadium from Season 12 as our template when breaking this down.

The Food Network made a video of this season that goes into the production design of the Iron Chef Kitchen. The video does not break down the structure of the actual kitchen furnishings itself. However, we can see how the production needs influenced the design of kitchen stadium.

When people think of an Iron Chef kitchen without having seen it, one would think it is most likely monochrome. Similar cooking competitions like MasterChef feature colored with silver and dark wood. In fact, my memories of watching Iron Chef Japan were always a silver kitchen with gray marble countertop. The lighting in the Iron Chef kitchen is like a sports stadium.

Based on the production design of Iron Chef America, they rethought how a kitchen set was going to look. They designed the set using lights to give a quick change of color and over 600 light fixtures. The show is able to change the look of the set in a matter of seconds like theater lighting. With the invention of LED lights, using lots of bright lights no longer overheats the kitchen. I mention all this because the lighting affects the kitchen design of Iron Chef America.

With several lights overhead, it is important the kitchen surfaces are not reflective so that the set is not overexposed. The countertops are dark tone natural wood with dark gray. In this show, the countertops mimic both gray marble and the silver kitchen by using a dark gray terrazzo countertop. Terrazzo surfaces have been trending in kitchen designs and this show has been reflecting that trend. The overall effect is that it looks like a seamless mixture of contemporary and industrial kitchen styles.

The colors of the kitchen are all neutral to make the bright colors of the food stand out. Usually, in cooking competitions, a beautiful display in vegetables in their vibrant hues makes for attractive photography.

The entire set forms a half-octagon, reminiscent of an octagon in an MMA fighting ring. The outside of the counters toward the camera is a stylistic minimal design of the crossed blades of the logo.

Breaking Down the Competitive Kitchen

In the video from Food Network, we see a brief close up of the backs of the counters. They are open shelving so that the chefs don’t have to worry about figuring what is in these cupboards. One section has base cabinets for all of their cookware like baking sheets, pots, and pans. Also, in these base counters are accessories like sieves, spatulas, rolling pins, and butane torches. Instead of rolling shelves, they place things on large baking sheet pans to access accessories in the back.

The long counter bends at an obtuse angle to accommodate both the chef and sous chefs. There is a double basin stainless steel sink towards at end of the counter, for water or cooling down pasta. The faucet is a pull-down spout which makes room for putting large pots and colanders beneath it. At the angled part of the counter are mixers and food processors, close to cameras because their actions are visual.

Along the other side of the counter is a range with six grills; one has a pot of boiling water.  At the other end of the counter is the oven, positioned for camera access. It is notable that this is not a combination range and oven that a house is accustomed to. Thus, for competition reasons, one chef needs to access to the oven without someone being in the way at the range.

In the center of the kitchen stadium is a large island that both competitor teams share. On the tops of these island counters are small appliances to enable chefs to create any food. Everything from mixers, fryers, and ice cream makers are available on the countertops.

The refrigerator where the contestants get the food is an actual refrigerator. This is opposed to other cooking competitions like MasterChef where the first part of the competition is to source their ingredients by walking into a large space that is designed to look like the inside of a walk-in restaurant freezer. This is because there is a timer and sourcing food would only hamper the time they need for cooking.

How can we create the Iron Chef kitchen? Let’s get right into it.

Firstly, the kitchen style uses modern European cabinets. Since there are no wall cabinets, we can replace them with open shelving. The Iron Chef kitchen utilizes open shelving for the competitors to access all cooking utensils. For optimal everyday usage, we can have all the base cabinets be double doors and incorporate roll out shelves.

Most people will not need all the different appliances found in the stadium. Therefore, we can use a single slide in range that has the stove top and oven together. The maximizes the storage space and countertop space we have. As most kitchen cabinets are along with walls of the home, we can create a traditional “L-shaped” kitchen.

Finally, since we are not creating a production set, we can incorporate the infamous work triangle in the kitchen. For the set, the refrigerator is located farther away from the work station. Like typical kitchens, they will have a cabinet over the fridge and a pantry.

Minimalist Kitchens – How to achieve the clean kitchen design

Sunny C. - December 8, 2021 0
We see minimalist kitchens all the time on social media. These kitchens have clean countertops and no clutter in sight. Most kitchens will have...