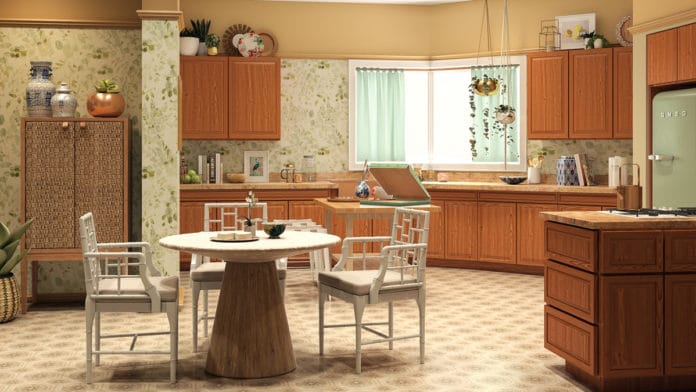 The Golden Girls Kitchen is one of the most famous kitchens in television history. The ladies tell stories from their past at the breakfast table or eat cheesecake to solve a problem. This quintessential 1980’s set was produced for a multi-camera show at Sunset Gower Studios in Hollywood, California.

How can the iconic Golden Girls kitchen be replicated for your own? Let’s break down the kitchen set, including the kitchen sink, to find out.

Yellow patterned wallpaper and wooden cabinets decorate the kitchen walls. The light yellow and light wood brings brightness to the kitchen without having to be white like in current kitchens.

The exterior of the cabinet doors features natural wood grain with knots with raised panels on the upper cabinets.  The base cabinets have a drawer panel and door with no drawer banks. False panels beneath the double basin silver kitchen sink keep the uniformity of the look.

Countertop surface looks the material as the cabinet so it most likely has wood sealant to protect from spills. Countertop space to the left of the sink has a mounted paper towel dispenser, can opener, and coffee maker. A 6″ backsplash covers the wall just above the countertop.

Where the Ladies Cook

Normally, the cooking range would be found against the walls of the kitchen. However, the show kitchen has a matching kitchen island with a four-coil white range top. There is a wing extension at the side if the cook needs more counter surface. Coil ranges mean that this range is electric rather than gas. In the 1980s, island stove tops were not common. This island placement enables us to watch the actions when someone cooks when interacting with the rest of the cast.

Other Appliances and Furniture in the Golden Girls Kitchen

Next to the sink is a large wooden rolling cart that serves as a worktable and another seating area. Beneath the table surface is a horizontal rack to store kitchenware. People might notice that when the four ladies are all together, they don’t sit at the same breakfast table. In fact, one of them tends to sit or stand near this extra rolling cart. If you seated all four ladies at the small table, one of them will have their backs towards the camera. It is uncommon for a kitchen to have two islands.

In the house is there’s no dining room as the kitchen is both for dining and cooking. This is likely a production consideration; there are not many scenes that would take place there if that room existed. However, to keep it stylish, there are three Chippendale dining chairs with a bamboo back frame. This bamboo matches all the bamboo furniture in the other rooms of the house, especially the living room.

There are two doorways into the kitchen. The most visible one is the swinging door with a metal plate, similar to a restaurant kitchen door. The kitchen generally does not need a door and sometimes, it’s just an open archway. But the door creates comedic moments like listening on one side, pretending not to hear what’s in the other room.

Next to this door is a white baker’s rack that holds jars and bowls. This is purely for set decoration since no one interacts with this area and it fills up the space.

There is an implied second door behind the pale yellow touch-tone corded phone which leads to the garage. The long curly cord is meant to be long enough to use anywhere in the kitchen.

The setting for the Golden Girls is contemporary, which was Miami in the 1980s. Believe it or not, the same executives that did “Miami Vice” came up with the basic concept for this show. The Miami look had a lot of pastels but the wallpaper was often yellow with a plant pattern. Copper and ceramic cookware like cake molds, pans, and baking tins decorate the wall above the wall cabinets. These were usually above the upper cabinets but were also on sides of walls to fill in space.

Other Unique Setups for Production Design, but Impractical for a Home

According to various production design notes on the show. The breakfast table had a tablecloth because it was reflective. Breakfast tables are usually utilitarian surfaces. The glare from the reflection from the overhead stage lights would have been bad for the camera.

The other unique staging done for production consideration was the placement of the kitchen island with the range top. The base cabinets cannot be opened because the range top is placed so close.

Can we recreate the Golden Girls Kitchen?

Although this kitchen was designed as a production set, it can easily be replicated. Natural wood grain cabinets are still popular

Despite stove tops not being common in the 1980s, many modern kitchens have island cooktops and downdraft hoods. Rather than having extra countertop are fold out, quartz countertop can extend further out to double as seating.

For design assistance or questions about kitchen ideas, feel free to get a free kitchen design.